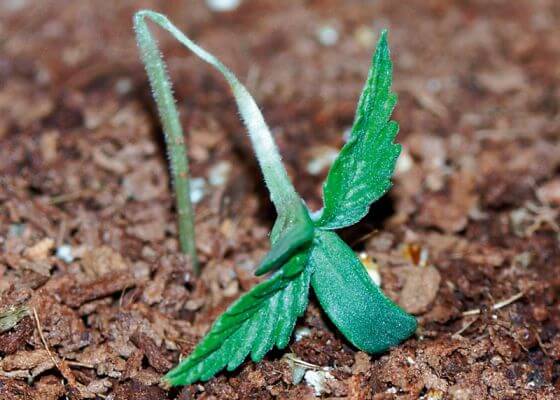 When everything is set up and every seedling in its rightful pot just waiting to pop out, sometimes they already topple over before getting much of an enthusiastic start. If you notice seedlings keeling over as it emerges from the soil, it is highly likely that it’s suffering a disease known to attack many green younglings called damping off disease.

What is Damping Off Disease?

As the moniker suggests, it’s a disease that roots from a plethora of soil-borne fungal infections such as various kinds of mold contamination or rotting of stem.

On that note, its rapid decay is due to several fungi such as Rhizoctonia, fusarium, and phytophthora. Most often than not, the primary culprit is stemming from the species of soil fungus called Pythium.

In a typical scenario, most infected plants will go through the germination cycle usually and could pop out as expected, though it becomes mushy and falls over within a few days. Some seedlings, on the other hand, suddenly die as soon as it emerges.

Damping-off is a deadly disease that can compromise your entire crop, which is why we’re here to rain you down with tips and tricks on how to spot, prevent, and control this pesky illness using organic techniques.

What Causes Damping Off Disease in Plants?

The pathogens such as fungi and mold, find its way into the seedling tray in many ways like the following:

It’s crucial to take note that all pathogens flourish in soil and plant debris, so be wary of the cleanliness of your set-up when starting a batch for the new season. Other factors that contribute to damping off disease are low light, overwatering, high salts from the fertilizer mix, as well as cold soil temperatures.

What are the Signs and Symptoms of Damping Off Disease?

Cannabis seedlings that have the damping-off disease will die quickly, which is why it’s vital to spot the tell-tale signs as soon as possible. Be on the lookout for the following red flags:

Prevention Tips for Damping Off Disease

Once your crop is struggling with damping-off disease, death is inevitable as there is no cure. The moment the seedling emerges, it often topples over, meaning that you will lack time to help it survive. For that reason, it’s essential to know these preventive tips so you can grow your plants with peace of mind.

Damping-off disease from seedlings is a life-threatening problem for your cannabis plants. Not only will it push your seedlings to the ground before it is even given a chance to thrive, leaving the disease unkempt can spread itself until the rest of your crop suffers from the infamous fungal problems.

For that reason, its crucial to know how to spot its symptoms so you can save the rest of your crop. Meanwhile, knowing preventive measures is also critical as the disease, unfortunately, has no cure.

If you are looking for RQS, Cannabis or CBD seeds, get in touch with Coffee Shop Seeds to see how we can help!

Our Guide on Auto-Flowering Cannabis Plants

How to Deal with Stretching Cannabis Seedlings