White Widow XXL Auto is a feminised seed strain that is the result of a selection of White Widow plants (Brazilian x South Indian) based on their size and yield which were then crossed with the auto breeding plant BF Super Auto #1. This mostly indica (70%) strain grows well indoors as well as outdoors in a range of climate types.

The complete life-cycle of this strain is done in 70 – 75 days. Plants grown indoors will reach a height of approximately 80 – 90 cm. while those cultivated in an outdoor setting will become a bit taller at 100 – 120 cm. Yields indoors are about 500 gr/m2 while outdoors a single plant can produce as much as 1200 gr. The buds are compact and have a distinctly white appearance due to the amount of resin.

Over the last decade, Barney’s Farm have produced some of the world’s most popular varieties of cannabis. Their Pineapple Chunk winning the Indica Cup in 2009, and Critical Kush becoming a bestseller within months of release.

In the late 1980s, a small group of breeders began to cross-breed marijuana strains, meticulously selecting cannabis seeds from every corner of the Middle East and Asia. It was the fruitful harvests that kept the group’s spirits up during a 3 year stint in the rural mountains of the Himalayas. Cultivating many sativa and Indica hybrid’s. One particular member of this team would go on to create Barney’s Farm.

Winner of countless awards, with a passion and desire to continually produce ‘new and exciting’ strains of cannabis seeds. Therefore, it’s no surprise that Barney’s Farm creations are sort after worldwide. For this reason Barney’s popularity remains as strong today as ever. With over 25 years of history, experience and knowledge, new strains are frequently released. 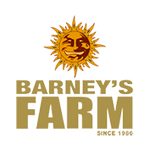