Auto White Widow is a vigorous and strong auto which gives a powerful effect, she was produced from their original White Widow mother plant using the same genetics which have won countless awards and satisfied thousands of growers. Auto White Widow is very consistent and easy to grow. She produces strong aroma???s during growth and dense hard buds. The effect is a well-balanced and pleasurable one, combining a powerful cerebral impact with a relaxing physical effect. Its ancestor White Widow???s characteristics are present both in its physical appearance and in its great productivity of resin. The only notable difference is its higher level of CBD, which makes this seed really adapted for medicinal uses.

Victory Seeds are a Dutch Seedbank who pride themselves on offering the most reliable and potent strains available. All of Victory seeds are bred from the highest-quality plants for optimum potency and aroma. They expertly select plants that are highly suited for medicinal use. Selectively breeding some of the worlds best strains. These award winning genetics are then improved on, focusing on both THC and CBD levels, medicinal values, visual appearance, aroma, taste and potency. Combining Strength, Power, Quality and Yield specialising in feminised and autoflowering cannabis seeds. All of Victory Seeds offerings are hand selected to ensure maturity and viability. Seeds are organically grown under strictly controlled conditions. 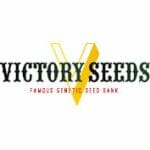