First genetic evolution of Speed Devil, developed during the 2009-2010 seasons. In this second version of Speed Devil has continued the rapid flowering of its previous version, super-fast produces plants that are ready for harvest just in 60 days. In Speed Devil # 2 has increased the average size of plants which stands at 70-80 cm. Another feature of this version is that it has substantially increased the formation of lateral branches, which produce heavy buds. We also find a bigger formation of crystals with a much more intense aroma. Sweet and musky with flavors reminiscent of yeast and cheese. THC levels are at 15%.

Sweet Seeds are a Spanish Seed bank established in 2006. Winners of numerous awards including Best Seed Bank at Spannabis 2008 and then again in 2013. Specialising in Feminised cannabis seeds and one of the first to offer autoflowering seeds, Sweet seeds use their decades of knowledge and experience to bring you something not many other seed banks are able to offer. Placing pride in the quality of genetics used Sweet Seeds are able to create 99.9% female plants, thanks to modern breeding techniques and traditional knowhow. Sweet Seeds are extremely passionate about cannabis. So much so, in fact, that they class themselves first and foremost as consumers and collectors of fine cannabis genetics. Storing them for future generations. "Fifteen years of passion, hard work and research devoted to our beloved plants and seeds." Sweet Seeds consistently bring new and exciting strains to the market for us all the enjoy. Some of their latest creations are causing waves across the cannabis community. strains like Red Pure CBD Auto. As the name suggests, is high CBD levels (15-17%) and low  THC levels she will seduce you with her beautiful red flowers. However, the new Tropicanna Poison F1 FAST with low CBD and THC up to 24%. A result of crossing an elite clone selected from Tropicanna Cookies, with a red flower phenotype. Whichever Sweet Seeds strain you choose you can be sure of top quality genetics. 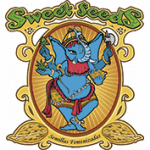