Orange Cinnamon Swirl Feminised results from crossing two top-notch strains; Namely, Pot of Gold (F1) from Flying Dutchman and California Orange (P1). The latter is a pure-bred marijuana strain that stood at the cradle of most citrus strains known today. It produced some of the tastiest award winning buds throughout the history of the Cannabis Cup.

The influence of the Pot of Gold is noticeable in the structure of the buds, making rock-hard nuggets and a large yields. As a result, branches need support during flowering because of their weight which might otherwise cause them to snap. Growers of Orange Cinnamon Swirl Feminised can expect little variation among the individual females. All plants grown from these G13 Labs female cannabis seeds will grow uniformly. However, the phenotypical variations manifest in the buds. Some will have a pronounced citrus flavour, like orange lollypops, while others will tend to be a bit more Kush-like with a touch of sugar and vanilla.

60% indica strain taking 55 – 60 days to flower indoors with yields between 450 – 500 gr/m2. Outdoors, north of the equator, harvest will be at the end of September through early October with each plant producing 700 gr. THC content of 12 – 15% giving a euphoric, and ultimately relaxing, high.

It was only during time in Amsterdam that G13 turned from underground cultivators to official cannabis seedbank. As relationships in the Dutch capital were formed with other experienced breeders and agents G13 Labs was officially launched.

The rest, as they say, is history and the seedbank has transformed into a globally renowned company. Revered for their excellent yielding, fast flowering strains and the exquisite tastes and aromas, G13 popularity is constantly increasing.

Who doesn’t know their biggest seller? – by some distance is the superb Pineapple Express. 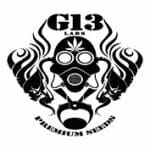