The Bulldog White Widow Regular has a pedigree of a Brazilian strain crossed with the Afghan and is mostly Indica. It produces a supremely extra large yield, with a total indoor flowering time of 9-10 weeks, and it is ready to harvest outdoors in Mid-October. Its effects are medically sedative with a sweet flavour and powerful aroma and smell. Highly valued strain for its medicinal properties.

The Bulldog Seedbank’s origins stretch as far back as 1975, when Dutchman Henk de Vries established the world’s very first coffeeshop. He named his new business venture after his most favoured companion, Joris, the Bulldog. The Bulldog Seed Company now offers a collection of premium feminised cannabis seed strains for a very competitive price. The Bulldog Seedbank has spent half a decade collecting unique genetics and invested significantly into strain research & development to ensure that their collection is one of the very best in the industry. 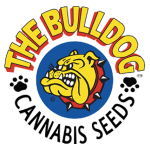