A transatlantic fusion of two infamous clone only strains, the UK’s sought after Psychosis meets the Green Crack clone out of the USA. The intention was to blend these two strains as it was felt there were complimentary characteristics from both strains in terms of plant structure and growth in addition to complimenting each other in flavour and effect. Both plants have a reputation of producing dank aromatic buds with the potential to show purple hues with cooler temperatures. Side branching on both strains is a common trait and has shown to come through in testing of this hybrid strain. The stretchy internode pattern of the psychosis has been reined in with tighter nodes from the green crack coming through, eliminating some of the scrappy spindly lower branching that sometimes can be prevalent in psychosis and adding some strength to branches, more woody/fibrous branches are to be found, although. Leaf shapes are more in keeping with the green crack, but some influence on the razor edged leaf shapes from the psychosis does shine through as the plant becomes established. The pungent odours from the psychosis are present during the growth of this strain. Stem rubbing even early in veg will bring smells of skunky funkyness, dirty earthy skunk like smells remaining on fingers, with hints of sweet fruits found subtly in the background. Expect harvests of good yields as both parents are renowned to consistently perform and this has been shown in testing of this strain, with returns of impressive sugary coated colas. Odour control is strongly recommended. Finishing times are generally in the 60 to 65 day window. This strain does not lack flavour, and has a tendency to linger on the palette for a reasonable time. The effect of this strain leans towards the psychosis, an intense sensation that is not akin to your everyday sativa, not for daytime.

SickMeds Seeds takes pride in developing the world's finest medicinal cannabis seeds and also is offering a few legendary breeds in 100% feminised versions that have been available in "clone only" until now. SickMeds mission, along with breeding for the commercial market, is also to preserve genetics and continue the interbreeding of all our strains which are available in both regular & feminised form. 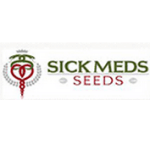