Barney’s Farm created Moby Dick Feminised by carefully merging together White Widow and G13 Haze. Some of the biggest yielders you can find could only mean one thing. Breath-taking yields of over 700g/m2 that are easy to achieve for all levels of experience. Upbeat long lasting effects.

This girl will catapult you fiercely into a separate reality of creativity and production, unleashing a fast-hitting high that will keep you totally energised through the day without wiping you out. THC sits at 27%. That is Moby Dick. And this is why she is such a firm favourite of so many in the growing business.

A 70 day flowering period adds to the allure of this world beating cannabis strain. Outdoors flowering completes its cycle by the first week of October. Growers love her sweet vanilla scents and guaranteed, heroic yields.

Over the last decade, Barney’s Farm have produced some of the world’s most popular varieties of cannabis. Their Pineapple Chunk winning the Indica Cup in 2009, and Critical Kush becoming a bestseller within months of release. In the late 1980s, a small group of breeders began to cross-breed marijuana strains, meticulously selecting cannabis seeds from every corner of the Middle East and Asia. It was the fruitful harvests that kept the group's spirits up during a 3 year stint in the rural mountains of the Himalayas. Cultivating many sativa and Indica hybrid's. One particular member of this team would go on to create Barney's Farm. Winner of countless awards, with a passion and desire to continually produce 'new and exciting' strains of cannabis seeds. Therefore, it's no surprise that Barney’s Farm creations are sort after worldwide. For this reason Barney’s Farm’s popularity remains as strong today as ever. With over 25 years of history, experience and knowledge, new strains are frequently released. 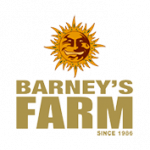