An easy strain to grow, sativa-dominant Humboldt Sour Diesel will double its size during flowering and has a moderate degree of mould resistance despite the density of its buds. Indoors flowering lasts for about 65 days while the harvest window outdoors is October 5th – 20th.

Humboldt Seed Co. was formed by a group of biologists in 2001 in Humboldt County, California, the home of the "Emerald Triangle". First up was a breeding programme to supply medical patients under California's Proposition 215. In tandem with legal developments the company now breeds for the recreational market as well supplying both regular and feminised cannabis seed strains Breeding is carried out on its farm in Humboldt County, claiming that only the very best of the best is retained for breeding purposes. Humboldt Seed Co. guarantees that its seeds will perform to their best potential. It continually strives to provide customers with the highest quality for their ultimate satisfaction. Humboldt Seed Company's stated mission is: "to provide high-quality cannabis seeds to customers who want to grow their own cannabis plants". 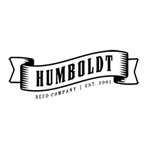