Buddha Classics AK Feminised can trace its lineage back to the 1970s. The name is often taken as a reference to the AK47 semi-automatic weapon but in truth refers to its Afghan Kush background despite its slight sativa dominance.

The origins of its parentage harks back to a time when travellers could explore remote corners of the world more easily, sometimes bringing back seeds of rare and exotic cannabis strains. By crossing various permutations of Afghan, Thai, Colombian and Mexican strains a number of classic ‘modern’ strains were established. One such is AK.

Buddha AK was produced from cuttings taken more than 20 years previously, and subsequently worked on to obtain plants that were easier to cultivate and handle. It has been bred for a manageable size and high levels of THC.

Various pheno-types are fruity to citrus with earthy notes. Indoors, flowering takes 60 – 63 days to yield 500 – 550 gr/m/2. Outdoors, plants are ready in the second half of October in northern latitudes and in the latter half of April in the southern hemisphere. Outdoor-grown plants produce 500 – 2000 gr. each.

The effect is very upbeat, energetic and uplifting, raising the spirits on the gloomiest of days. It is a great social cannabis strain and delivers good vibes all round.

Buddha Seeds are a Spanish cannabis seed bank with more than 15 years of experience in the development of non autoflowering strains. They are focused on the stabilisation and the improvement of the cannabis genetics, being the research, development and innovation is the foundations the company was based on. Behind each strain there is a big selection and stabilisation of the genetic traits as well as exhaustive quality control to guarantee the success, from the germination to the harvest. Buddha Seeds has perfected regular and feminised seed versions of their autoflowering marijuana seeds. Specialising in the growth of auto flowering dwarf strains. Having built reputation on the quality of their products, Buddha Seeds are now a world renowned seed bank In 2014 Buddha Seeds won a prestigious award at Spannabis 2014. Buy your Buddha Seeds from Coffee Shop Seeds today and earn 1 reward point for every £/$/€ spent. 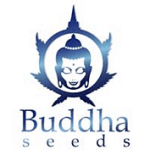