Bubba Slush is a Bubba Kush x Gelato cross. Bubba Kush is a classic from California and Gelato is the new kid on the block which rapidly became almost everyone’s favourite, not only in the USA but all over the world. The original pre â€˜98 Bubba Kush was crossed with a reversed Gelato which we selected in our giant pheno hunt during the last few years.

The outcome of this hybrid offers the best of both worlds, creating one of the sweetest strains ever created. Combining heavy, dark chocolate and almost-coffee flavours of the Bubba Kush with the gassy creaminess of the Gelato.

Plants grow short and bushy with massive leaves and overlapping fingers. Buds are very dense and round, covered in thick trichomes. It can show some beautiful colours towards the end of the flowering period which lasts around 9 weeks. The effect is heavy on the body, while keeping the mind clear.

The Greenhouse Seed Company is possibly one of the most successful and recognised cannabis seed companies in the world. Winner of countless international awards including 35 High Times Cannabis Cups, Greenhouse Seed Co. are global leaders in cannabis, their incredible genetics are the result of years of intensive breeding. All strains produced by Green House Seed Company have exceptional medicinal properties as well as recreational pleasures whilst holding particular terpene profiles guaranteeing unique aromas and flavors. Established in 1985 in Amsterdam, The Netherlands the company has expanded into various markets. however, it wasn't until 2008 when The Green Hose Seed Company was officially launched. Green House provide a phenomenal collection of feminised and autoflowering seeds including their Multi award winning Jack Herer Feminised Seeds White Widow CBD Auto, which combines potency with medicinal properties, and their Super Lemon Haze Auto. Green House Seed Company have gained worldwide notoriety in the past 3 decades. They have many celebrity advocates and a wealth of satisfied customers and its easy to see why! You can buy strains from the Green House Seed Co. directly from Coffee Shop Seeds now. 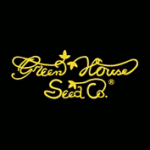