From a selected extraordinary mother, very cheesy and resinous. Healthy vigorous plants with a blue shine.Plants can three-fold in volume or/and triple in height after put on 12/12. The effect is very heavy bud head and body is in good balance. 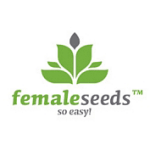